Riparia riparia
Passeriformes
Members of this diverse group make up more than half of the bird species worldwide. Most are small. However their brains are relatively large and their learning abilities are greater than those of most other birds. Passerine birds are divided into two suborders, the suboscines and the oscines. Oscines are capable of more complex song, and are considered the true songbirds. In Washington, the tyrant flycatchers are the only suboscines; the remaining 27 families are oscines.
Hirundinidae
Swallows are small, graceful birds with long, pointed wings, tiny bills, and small feet. They eat flying insects and forage over open water or ground. Many are well adapted to living near humans and use man-made structures for nesting. Swallows make their nests out of mud attached to a structure, or build in sandy burrows or in available cavities. Most swallows are social, foraging and migrating in flocks; many nest colonially, but a few are solitary. Most are monogamous, although extra-pair copulations are common in many species. The males of some species help incubate the eggs while others do not. Both parents provide care for the young. All North American species migrate.
Common summer resident east. Rare west.
Source of Bird Audio

Called the Sand Martin in some parts of the world, the Bank Swallow is North America's smallest swallow. It has slender wings and a long, narrow, slightly forked tail that appears almost square in flight. Like other swallows, Bank Swallows have tiny feet and bills, although their bills are more conical than those of other swallows. They are brown above and slightly darker on the wings than on the back and rump. They have a distinct breast-band and white throat, with some white wrapping back to their ears. Juveniles look like adults. Bank Swallows can be confused with Northern Rough-winged Swallows, but Northern Rough-wingeds lack the dark breast-band and forked tail.

Usually found near water, Bank Swallows are closely associated with sandy, vertical banks along rivers and lakes or where a bank has been created by human excavation. Bank Swallows forage over water or open fields.

Bank Swallows are usually seen in flocks, flying low over ponds and rivers. They usually forage in flight, but in severe weather they may forage on the ground. Their quick, fluttery wing-beats are more shallow and rapid than those of other swallows. These highly social birds nest in dense colonies of from 10 to 2,000 nests.

Bank Swallows are monogamous, although extra-pair copulations are common. These swallows use their tiny, conical bills and small feet to dig burrows in sandy banks. These banks are often not stable, and colonies move frequently because the banks collapse. The male generally digs the burrow, which can be up to five feet long. Deep inside the burrow, the female builds the nest of grass, rootlets, and weeds, lined with feathers. Both members of the pair incubate the 4 to 5 eggs for 14 to 16 days. Both feed the young, which leave the nest 18 to 24 days after hatching. The parents continue to feed the young for 3 to 5 days after they leave the nest.

Long-distance migrants, Bank Swallows are the last of Washington's swallows to arrive here in the spring. They begin their migration to South America soon after the young become independent, in late July or early August. Another wave of migrants, possibly Canadian breeders, appears here in early September. Bank Swallows gather in large groups before heading south, and they migrate in mixed flocks with Cliff, Tree, and Barn Swallows.

Bank Swallows are common in eastern Washington from late April through August. They are found in open areas with sand banks near water or wetlands. There is a large breeding area with an estimated 10,000 burrows along the Columbia River opposite White Bluffs (Benton County). Bank Swallows are rare during migration in western Washington. They do occasionally breed west of the Cascades; nesting colonies have recently been discovered along the Toutle River (Cowlitz County) and the Green River near Auburn (King County). 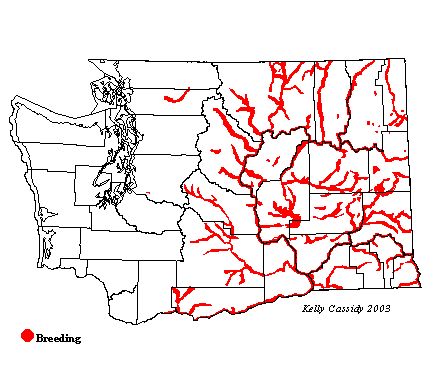